Traveling out of Chicago into Indiana and down Interstate 65, we now arrive at the Midwestern hub of Indianapolis.  It’s easy to forget that it wasn’t just the big metropolises that faced highway revolts and canceled freeways — as we saw with Winnipeg, plenty of smaller cities had to change their transportation plans as well.  As of November, 2018, Indianapolis is having political debate over what should be done with the I-65/I-70 split north of downtown (AKA “Dead Man’s Curve” due to the high number of fatalities on this stretch), as this particular section of highway nears the end of its 50-year useful life.  How much more interesting (or chaotic?) things might have been if they had thrown another freeway into the  mix!  Yet during the late 1970s, that possibility was considered.

The expressway plan for Indianapolis during the 1960s differed in several ways compared to what was ultimately built: 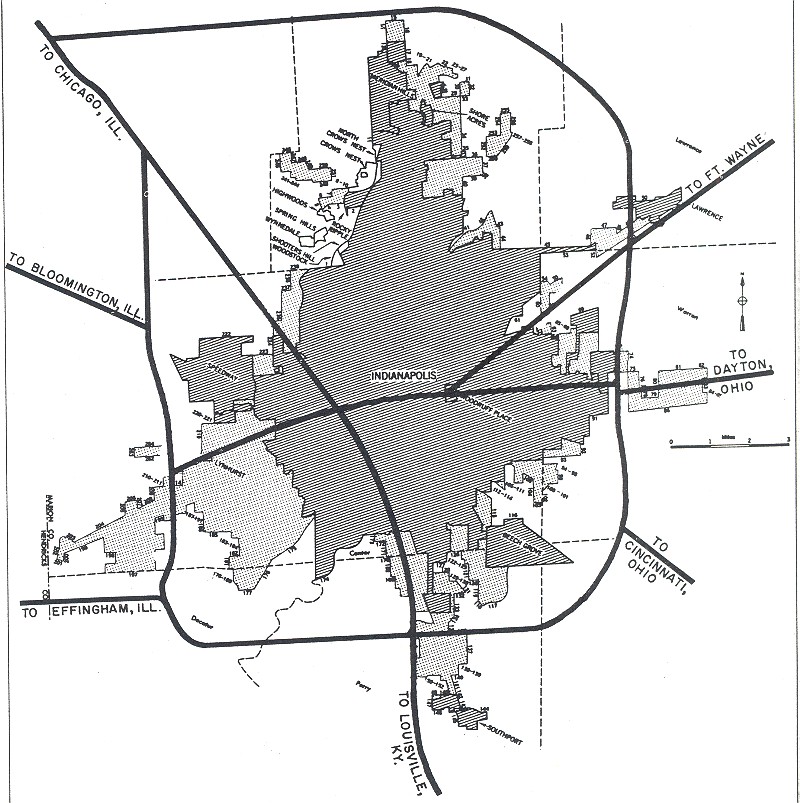 The original plan for I-65 was to cross the city west of downtown, taking a more due south direction before reaching the I-465 beltway.  I-70 was to cross I-65 to the west of downtown as well.  Apparently, the Indiana Department of Transportation never came up with plans to route I-74 through the city proper, letting the highway utilize the southern and western portions of I-465 instead.   Even more interesting were the original plans for I-69.  Coming from Fort Wayne, I-69 was to have come from a more easterly direction, passing by Lawrence along the current paths of U.S. Route 36 and Massachusetts Avenue, intersecting I-70 at downtown near Woodruff Place.  Later I-69 was re-routed to approach Indianapolis from further north, near Castleton.  These alterations led to the layout for the city we have today:

Of particular note, upon studying the above map, is the existence of two “sub-standard” freeways in the Indianapolis area: The Airport/Sam Jones Expressway on the city’s southwest side, which connect I-465 and the airport with I-70 — and Shoreland Avenue on the southeast side.  Neither of these highways were ever given a Federal Interstate, U.S. Highway, or Indiana State Route Highway designation, and thus remain unnumbered.

One particular roadblock in the Indianapolis expressway system was the lack of a freeway between the city’s north side and downtown.  Original plans had I-69 advancing further south beyond the I-465 beltway to meet up at the I-65/I-70 split, but this proposal was later abandoned.  Part of the problem had to do with the fact that since I-69 originally ended at I-465 (Exit 0) , extending the freeway further south would require all the exits for I-69 in the state of Indiana to be re-numbered — though, as others point out,  this will likely be done in the near future anyway, since I-69 is already being built in the southwest part of the state as part of the “NAFTA Superhighway.”

In 1978 an alternative to the I-69 extension was proposed: Interstate 165, which would have extended from the north I-65/I-70 split northward to 38th Street.

By 1981, however,  there was the question as to whether I-165 needed to be built at all, with some local officials feeling that Indianapolis’s current road network was enough to meet current local needs, and on July 30, 1981, I-165 was withdrawn from Federal Highway Administration plans.  Since then, there have been no plans for any further freeway construction in Indianapolis.  For those of you who live in Indianapolis, you can still see a sign of the proposed I-165 corridor to this day:

Traveling north on I-65 at the split with I-70.  Notice the “ramp stubs” to the right and left — these were to have been the northbound and southbound lanes for I-165, respectively.

One thought on “Short-term Thinking: Indianapolis and the plan for I-165”