For this post we journey to the north to pay a visit to our Canadian friends.  Don’t let the title fool you: there is actually a lot to see and do in the city of Winnipeg, Manitoba: there’s The Forks, the city’s riverside shopping and dining compex.  Just north of there is the Canadian Museum of Human Rights.  Assiniboine Park hosts the city’s zoo, a large botanical garden, outdoor theatre, and summer music festival.  There’s also tours for the majestic Manitoba Legislative Building. Many art galleries, parks and gardens, and other historic sites dot the city.

No, the phrase “nothing to see here” is referring to something else entirely.  Have a look at Winnipeg’s city map, courtesy of ontheworldmap.com, and tell me what’s missing: 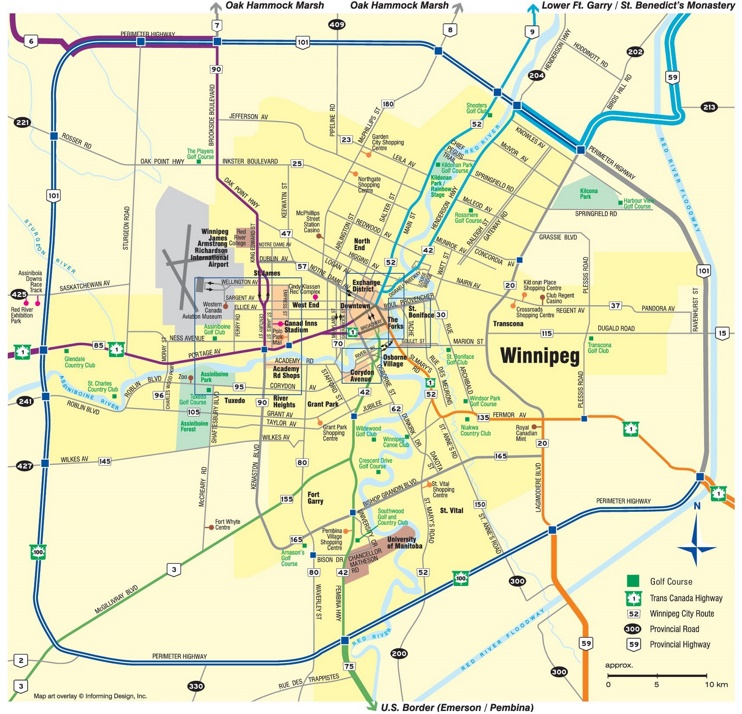 No freeways here, apparently (well, not exactly true.  Read on for more details).  The Winnipeg metro area is home to nearly 800,000 people, and yet there appears to be no expressway system criss-crossing the city.  Larger Canadian cities  like Toronto, Ottawa, and Montreal have extensive freeway networks.  Even cities closer to Winnipeg’s size, such as Hamilton and Edmonton, have more limited-access highways.  Yet Winnipeg, along with Vancouver in British Columbia, appear to have been unaffected by the freeway-building craze that dominated the 20th century.  How did that happen?

Let’s rewind back to the late 1950s.  Back at the time, the city of Winnipeg brought in United States traffic engineer Wilbur Smith, who hailed from New Haven, Connecticut.  Smith’s goal was to tackle the transport issues that Winnipeg was facing, including downtown parking and heavy urban traffic.  One of his proposals was to build a loop freeway around Winnipeg’s downtown district:

The proposed Central District Expressway was to skirt the downtown business district, with interchanges at Provencher Boulevard, St. Mary’s Road, Higgins Avenue, Logan Avenue, Water Avenue, and the Pembina Highway, along with several others.

A few years later, the two men who headed Winnipeg’s  Metro Planning Division, George Rich and Boris Hryhorczuk,  decided to survey the citizens of Winnipeg to find out more about their daily travel and commuting habits.  Their research culminated in the W.A.T.S. (Winnipeg Area Transport Study) recommendations of 1968.  The proposal was for Winnipeg to include five “radial” freeways, along with a “Suburban Beltway” that was to run a few kilometers inside the Perimeter Highway.  The plan was to have Winnipeg’s proposed freeway system completed by 1991. The 1970s saw major public opposition to the proposed network.  In 1980 city planners tried to include funds in the city’s budget to build part of the Northern freeway, but were unsuccessful.  Although many urban advocates praise Winnipeg’s lack of urban expressways, some in the city wonder whether the issue should be re-opened for further debate.

One tiny remnant of the city’s freeway plan did make it through to completion, however:  a small section of Winnipeg Route 42 right outside of downtown, the Benjamin Disraeli Freeway, which stretches for a little over a mile.

Facing north on the Disraeli Freeway, near the Sutherland Avenue exit.